I came home today from work and found the following folded up on our kitchen counter with a “To: Mom” written on the outside: 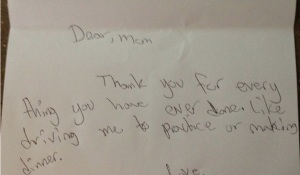 I have no idea why my son wrote this and he just said “I Dunno” when I asked him (after hugging him and trying not to cry a little, lest he get uncomfortable and never do something like this again). But it got me thinking about the power of a simple hand-written note.

Now, I know this doesn’t necessarily fit into the “theme” of this blog, but he did actually cite taking him to practice as one of the things he is thankful for, so I am going to go with it. Now that I think about it, he wrote about food and hockey – two things that he literally and figuratively cannot live without.

Growing up, my mother always made sure that my brothers and I wrote thank you notes for EVERYTHING. And we grumbled and groused, but we wrote them. And, after awhile, it sunk in for me that it truly is important to thank people for doing something nice. I recall getting a birthday card or something like that from my grandmother’s friend and she wrote in the note, “no need to send a thank you.” Of course, that only motivated me more to write a nice note of thanks because that is what you do when someone does something nice for you, regardless of whether they want the thanks or not.

Nowadays, I still send thank yous (I hope all the time but with my crazy schedule and my flighty mind, I fear that I miss some now and then) and I “force” my son to write them, too. He grumbles and grouses, although not too much, for which I am thankful. I do tend to give him tips on what to say and he prefers to write the bare minimum, but he does write them. And it is cute when he adds something on his own to the notes, like “thanks for the money. And the cake.” as he did in a recent note to his grandmother, who made him his favorite cake for 6th grade graduation.

What I try to avoid, whenever possible, is the email or text thank you. I may use that as a first stop – the day I get the flowers someone sent, for example, but I try to follow up with a hand-written note. I just think that the fact that you have to work a bit harder to send that note means something. Yes, it is easier and quicker and more reliable (that I’ll actually send it) to fire off a quick email, but there is something about getting something in the mail with your name on it with a brief note inside thanking you for what you did. It just means something.

Back to that nice note from my son. That was even more special because it wasn’t in response to any particular event or gift from me. It was completely spontaneous and, in light of his reluctance to do any writing above and beyond what is required by teachers, out of character for him. It was heartfelt and genuine and I love it.

So, even if he is most thankful for his basic needs – food and hockey – at least I know that he has some appreciation for what I do and realizes, at some level, that it takes work to keep things going day-to-day. And I love that he would take the minute or two that it took to put his feelings into writing.

No matter how bad your handwriting is, give it a try. Write a note and make someone feel special. It is worth the time.