The Washington Capitals do a lot with youth hockey in our area, both outside of practice and during games. I know many kids who have participated in the “Mites on Ice” event where a mite team gets to go out on the ice during an intermission and play a short game. My son did this once and really enjoyed it. His only comment at that time when asked what it was like to be on the ice in the Verizon Center was that “it was really white.”

This week he was on that ice again during the second intermission of the lockout-delayed home opener. Another event that the Caps hold is a shootout competition, which pits local goalies from different age groups against shooters through two preliminary rounds, with winners competing in the finals during a Caps game. They play it up as a “battle of the states” with the finalists from Maryland competing against the finalists from Virginia. My son was the VA goalie for one of the two Squirt divisions and thus made his second appearance on the Verizon Center ice.

A few observations from the evening: 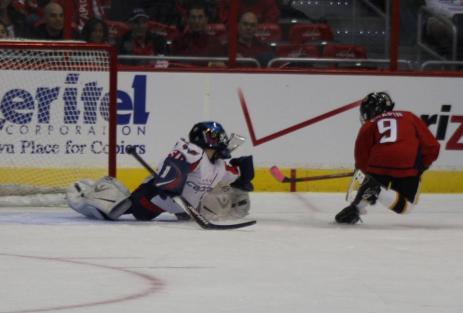 Making a save on the last shot.

My son is 10 so, in his mind, he was the top VA goalie in his group and that means that he is the best goalie in VA. We have worked to tone that down a bit considering he didn’t face EVERY goalie in VA and honestly didn’t have to compete against many in the early rounds. What I have stressed to him is this important life lesson: half (or more) of success is showing up. Many kids either couldn’t make it to the early rounds or didn’t know about them or decided that they did not want to participate in a shootout. It is simply not every player or goalie’s favorite thing to do. However, if you do want to do it and you can show up, you might just win. Of course, you have to step up and do your best – that part is up to you. But you may just end up in your own personalized jersey out on the ice in front of thousands of people.

Or, as my son called it, a ten-star night!