Stepping Off the Pitch

That spring I played my first soccer game. I was 8 and it was the first season for a girls’ soccer league in Bel Air, MD, where I lived at the time. I don’t recall much about it except that I scored once and played goalie a little bit, a position that I continued to play throughout my career. I do remember scoring the goal – I ran upfield and my eyes started watering and I couldn’t really see but I kicked the ball and it went in the net. Nothing spectacular, but, well, we were 8. 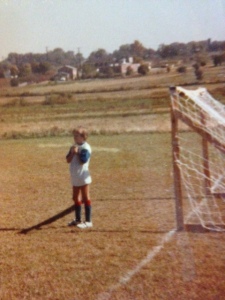 In the net my first season. I think I was praying that they wouldn’t score!

Last night I played my last soccer game. 37 years and countless games later; I am hanging up my boots and retiring from the beautiful game. The reasons are three-fold, as I explained to my coach: 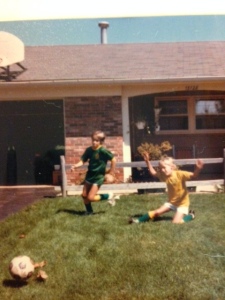 Schooling my brother in the front yard 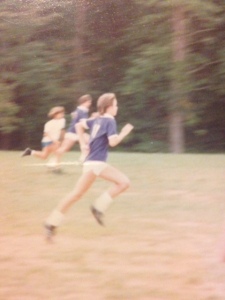 Shinguards not required. And nice short shorts. Ah, the 80s…

I started playing with our coach, Lou, when my son was 6 weeks old. He is now 13. He grew up on the sidelines, watching one or both of his parents run around like crazy people. He turned me into a true soccer mom – the mom who set her child up in his stroller to sleep while she played. The mom who passed her child off to his dad as they subbed on and off the field during a game. The mom who, as she ran down the field chasing the ball, yelled to the sidelines for her son to get off the top of the bleachers. Parenting from the field. Don’t think you’ll find a book on how to do that. 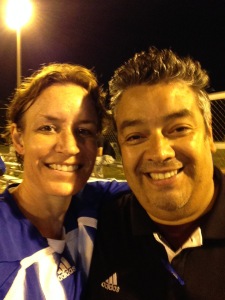 Our captain and I after my last game.

It’s funny – I used to define myself by the fact that I played soccer. It was something different than most other “adults” did (except, of course, all the other adults who also played soccer). It was my social life in my 20s when I played 4-5 times a week. Soccer kept me in shape. I traveled to play in tournaments to places like Vegas and… Johnstown, PA (ok, so Vegas was a bit more of a rush). I met so many cool and interesting people playing soccer. I met my husband playing soccer. 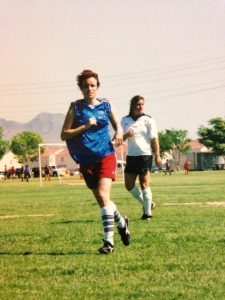 Today, I am starting to redefine myself without soccer. I am not sure yet what exactly will take its place, but I have some ideas. I certainly won’t sit still.

I am sure there will be times when I’ll miss playing. But I have so many great memories from my years on the pitch and I’ll always count myself lucky that I got to play the beautiful game for so many years.

And my enjoyment of the game won’t end, especially not this summer. Women’s World Cup, baby! Let’s go USA!!!!